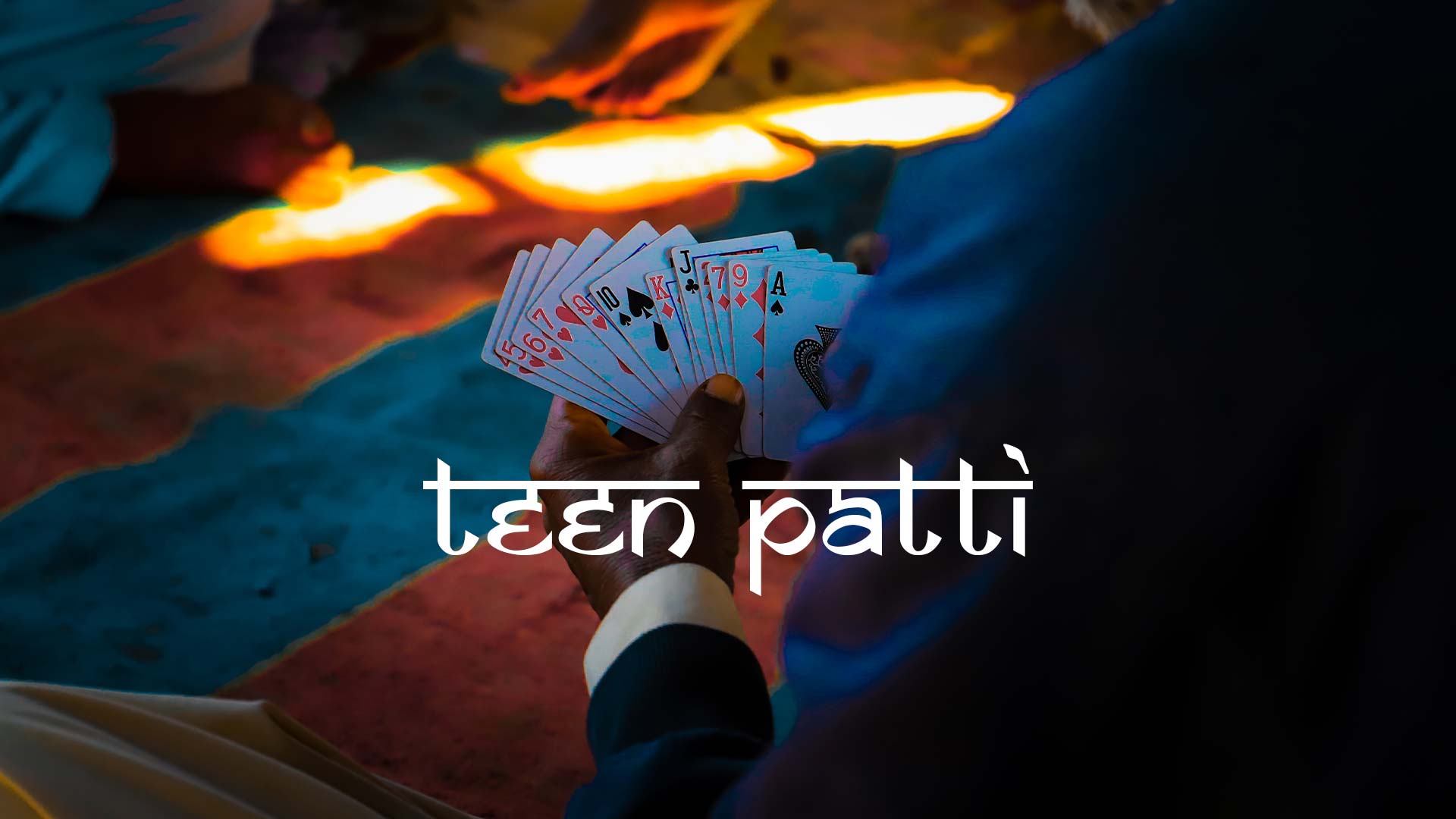 The Beginner Guide on How to Play Teen Patti – Learn the tricks NOW!

Teen Patti is a well-known card game among Indian players. Nowadays casinos include teen Patti in their portfolio, being easy and fast to gamble at. In this article, you will learn how to play teen Patti, ✅ how to use some tricks and tips to win the game ✅ and how to withdraw the prizes. ✅ Until then, you should know some information about this simple card game that resembles poker a little bit.

Some people believed that Teen Patti started back in 1500 BC according to the Sanskrit of Mahabharata. The game objective was to gather people and entertain themselves with the easiest rules and gameplay. It was so popular that it started to be traded in European countries and played by a large number of people. 🤑 Now you can try it out by buying a deck of cards or by gambling with real money in an online casino. 🤑

Before learning how to play Teen Patti, did you know that it has a direct connection with Krishna? An occasion like this can gather your loved ones in one place and party while playing this card game. There is no celebration without Teen Patti, as much as there may be no week without it. Games of luck were a part of the Indian culture for 4 millenniums. As expected, Teen Patti was an old game. Scholars think that its origins began between 1500 BC to 2000 BC.

Hindu traditions are linked to this card game. People believe that the wife of Shiva played with her husband card or dice games to entertain themselves. From them, people developed Teen Patti and created the perfect card game for everyone. Today, Teen Patti evolved and it’s now available in your favourite online casinos. Many developers take this traditional card game to another level so you can gamble with your cash on it.

What is Teen Patti

As it was stated at the beginning of the article, Teen Patti is a traditional Indian card game, played with one deck. The game starts when 3, 4, 5 or a maximum of 6 people sit at the table. Players play against players or a dealer plays against other contestants. It’s quite easy to learn how to play Teen Patti.

If you already know some poker rules, then it will be easy to gamble on them. The jokers are taken out from the deck and all of the cards are dealt with their face placed down. Another thing you have to know is that at the beginning of the game, you and the other players have to place on that round the minimum bet. These bets are recently collected and they are called boots.

How to Play Teen Patti

Now you are one step closer to learn how to play Teen Patti and which are Teen Patti rules. Beginners have to read this before starting to play with real money in one of the best Indian casinos. Don’t worry, everything is simple, intuitive and logical, just as it is in poker games. The goal of the game is to have a better hand than the rest of the players. But..how can you start playing and what else you have to know?

Sign Up on a casino and complete the form with all of your ID data.

Select one of the best game from the casino portfolio after you learn how to play Teen Patti.

Place a bet by selecting the chip value.

Play against the other players and try to win the pot placed in the centre of the game table.

Teen Patti, like blackjack, poker, baccarat, craps or even slots has specific gameplay and steps that have to be set by the players to play. Of course, you’ll have to make a deposit and then gamble & apply smart strategies whenever your intuition is telling you to do it. Here are the rules!

Besides these rules, to learn how to play Teen Patti online, you need to know which are the possible sequences:

As it was already mentioned above, in a Teen Patti game, gamblers can be blind or seen. Each one can place different bets. To learn how to play Teen Patti, you have to know the bets and the actions.

Now we move on with the article and we will like to tell you more about the odds to learn how to play the Teen Patti game in all of its variations. Which are the main chances for you to create great hands? First of all, it depends on your luck and strategies. As you know, the game is played with only one deck of cards, which means 52 cards.

Did you know that after you learn how to play Teen Patti you can try and use some strategies for a better outcome of the game? Which are the best of them and how they can help you?

How to Withdraw Teen Patti Winnings

To withdraw your winnings after learning how to play teen Patti like a pro, you have to pay a little bit of attention. For starters, please check out which is the minimum amount of money requested from the casino to be withdrawn by a client. You may not have enough funds or you may have everything it takes and complete this process.

Check this out by visiting the withdrawal section of the casino. If you are eligible, just select your favourite payment method, complete the given form and the amount of money you want to take out.

In many cases, taxes may apply. Also, the processing time varies and it can take up to 3 to 5 days to receive your winnings. Contact the support if problems appear while wanting to make a withdrawal.

Did you just understand how to play Teen Patti, which are the best strategies to apply and which hands are most likely to appear in your hand while gambling on this game? If so, now you should know more about the best and most played variations of Teen Patti. 5 of them are a no brainer for many Indian players, so you have to make sure to try them out! In our list, you’ll find out Mufliss, 999, Sudden Death, Plus Sign and Pack Jack.

You may find this game as Lowball. The ranks of the games are inverted. Here is an example. Let’s compare a hand of A, 10, 3 and A, Q, 2. The one that will win will be the first one even if Q is higher than 10. That’s the rule of Mufliss!

Above we discussed what is Teen Patti and even how to win at Teen Patti. But.. Do you know what 999 is? All you have to do is to hit a hand that will be close to 999. You will win if you do that!

On Sudden Death, at the final round of the game, a deck of cards is distributed equally among players until another competitor says STOP. From that pile, you’ll have to pick up the highest one to win

Learn how to play Teen Patti’s most popular variation! On the game table, the dealer will make a plus sign with 5 visible cards. All of the 5 cards are considered to be the jokers of the game and can be taken by players from the horizontal or vertical part. When you show, use the joker for higher chances of winning!

On Pack Jack, each player receives 3 cards and the other 3 cards are placed on the game table. You can pack more in this game to increase the winning chances. The jokers are replaced each time a player packs. Make sure to try it after learning how to play Teen Patti game

Now that you learn how to play Teen Patti, there is one more thing to do! You have to choose if it’s better to play it online or offline. Of course, you can gather your family and friends to play Teen Patti just for fun but, once you want to take a risk and entertain yourself completely, you have to play online.

To stay on top of your game and improve your odds of winning, we recommend reading more about similar casino games.

Learning how to play Teen Patti is fun and easy. The experience of gambling online with professional dealers and other players is thrilling and wrapped out with big pots. There are huge chances to learn how to win the Teen Patti game if you follow your intuition and take into account our tips and tricks. Don’t forget to play responsibly and have fun!

What are the best hands in Teen Patti?

The best hands in Teen Patti are Trail, Pure Sequence and Run.

Can I play Teen Patti from India?

YES! Teen Patti is the most played and loved Indian card game and it’s available. For as long as you play on a licensed casino, yes, it is also legal to play Teen Patti in India

Do you need to have some skills to play Teen Patti?

Yes and no! This depends on your luck. Don’t forget that Teen Patti is also a game of fortune and you should be aware of this. Yes..skills may help you, but only when your intuitions help you.

Who deals the cards in Teen Patti?

You’ll be surprised, but the dealer is one of the players. The dealer role changes during the game. If a player wins that round, he will be the dealer for the following round. The same principle is kept for other players who win.

Is sideshow a mandatory move?

No it’s not! You don’t have to ask for a sideshow if your hand is bad and your competitor has the right to refuse it. Only seen players can use this action.